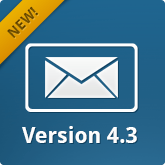 Version 4.3 of the  WordPress Newsletter plugin is a minor release containing some much needed fixes, improvements and new features to our users.

Some new changes in this version:

This version solve some known issues:

Attachments not sticking with some newsletters

We’ve found a bug where some attachments were not sent with some newsletters. This is fixed now.

Some users had issues with update preview on autosave. The preview do update now with autosave.

When sending via Ajax it says “You must provide at least one recipient address”. We’ve made improvements to ajax sending.

See our release notes for v4.3 on more fixes and enhancements in this version.