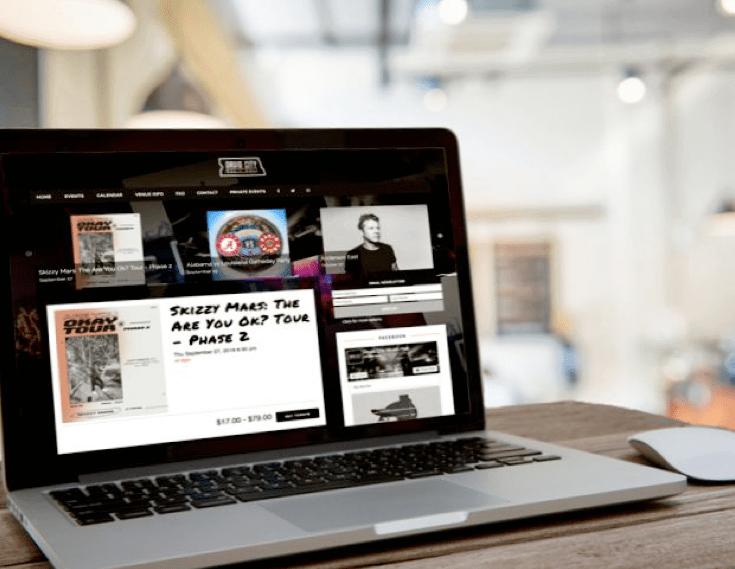 WordPress users are now able to utilize and experience an update with modifications and new features like no other before. The new WordPress 5.0 has multiple fixes and modifications. But the most exceptional part of the upgrade is the new editor called Gutenberg. This will change how you will use your CMS. The update is all about blocks meant to improve editing and page maneuvers. There are is also a new theme and other improvements like security. New features and benefits include:

The update is mostly Gutenberg which is an editor that allows developers to edit, add and manipulate content much easier. WordPress has gone past the usual text editor and Gutenberg is the default editor in this 5.0 version. You can use the classic editor alongside the new editor but only for the next two years.
Whether you are a developer or a user you can benefit from the new framework and interaction patterns. This block-based editor identifies the web page as independent blocks which can be brought together. As a web publisher, you can re-organize the blocks and experiment on them thus obtaining more utility.

As a developer, you will be able to create quality and versatile layouts using the block-based user interface. The components of the page are shown in block. You can access them from a collective menu. You can be able to edit and create custom pages for users at any point on the page. 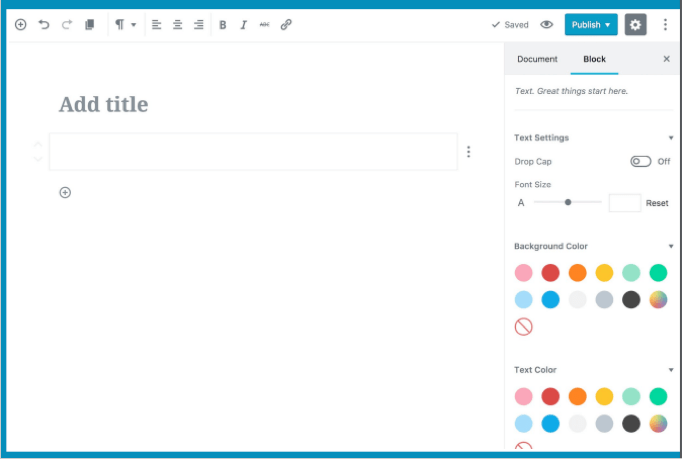 In WordPress 5.0 development is done at individual sections. With blocks, content is categorized into buttons, lists, and galleries. You can move, combine and manipulate the block when creating content. Each block has a unique semantic value. This allows you to arrange them in any number or page-type. You can edit using HTML or in combination with the previous editor plugin. There are block units namely;

• Recent, meant to show eight blocks and embeds which have been used recently

• Embeds, a unit meant to show available embeds and adding new ones 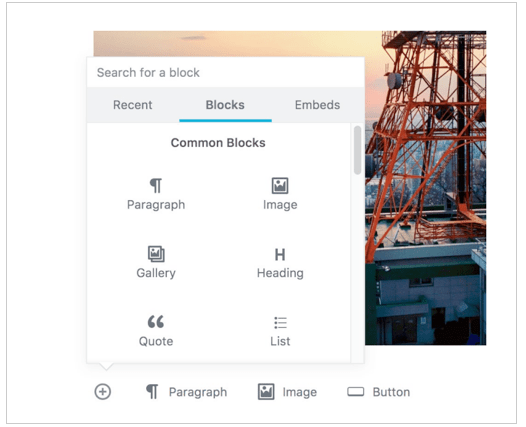 Gutenberg provides HTML anchor tags that you can use to link page components using headings. When you select a heading an anchor block shows up below the heading. You can easily obtain a link and place it on a hyperlink box.

You are also provided with more CSS styles which allow you to assign classes to the CSS file as well as add more styles to your blocks. Also, you can add more buttons and customize the background using the block for buttons. You can also simply change the color of your text by adding a CSS style.

The new code editor provides a custom HTML which allows you to move around the code much easier. There is also a new cover image functionality where you can add the image at different orientations with an option of dimming it. There are responsive galleries which you can move around the page. Also, the new version has more options for styles and aligning texts.

Regarding table of contents, incorrect headings are flagged thus allowing you to access the content much easier. You can now make columns together with inline texts, as much as possible. Gutenberg provides a verse block meant for literary passages. It has also availed widgets for latest posts, categories, and custom shortcodes.

The design of new editor allows you to incorporate any form of multimedia. It is also useful when rearranging your core content, without changing how the web visitors view the page. This update is for you as the owner of the webpage to view content on separate blocks.

The wrapping or block feature allows you to maneuver easily. These blocks are also friendly whether you prefer CSS or HTML. It’s all about making the process seamless without affecting the sequel. Multiple blocks have been availed and more are expected from the WordPress community.

Flexibility to Read and Write. The new WordPress editor is built on a JavaScript framework called React which is of great utility to you as a developer. You can now make use of multiple development technologies like WebPack and REST API. There are more capabilities in developing blocks.

The WordPress Community has also established the create-gluten-block project which helps you to develop web pages without experiencing difficulties in language. You can be able to create blocks much easier even without configuring the framework.

The editor allows you to create reusable blocks when building multiple client sites. This feature offers great consistency in design and content placement. Users can add content at any moment and the appearance and feel still remains intact.

Block Styles. WordPress 5.0 features a 2019 default theme which has a stunning appearance and multiple custom styles. You can apply different styles to different blocks during development using theme plugins. The theme is well-placed on the background thus allowing you to see what you are creating more clearly at the content editor. All creation happens vividly in front of you.

Type-based Layout. There is a simplified layout which changes with typing. The new WordPress theme interface features enough whitespace and aesthetics, especially with the sans-serif headlines. The headlines are coupled to the classic serif body text. Utilization of system fonts enhances the loading speed which implies that you will save time when networks are slow.

Flexibility and Responsiveness. The new theme is flexible which means you can apply it to any type of a website. It caters for the needs of a business site, photo blogs, among others. The update also touches on mobile utilization where it has improved response through its theme. Your visitors using mobile devices and smaller screen sizes can be able to view content without a hustle. When it comes to mobile devices, the new WordPress theme is fast and improves the overall performance of your website. 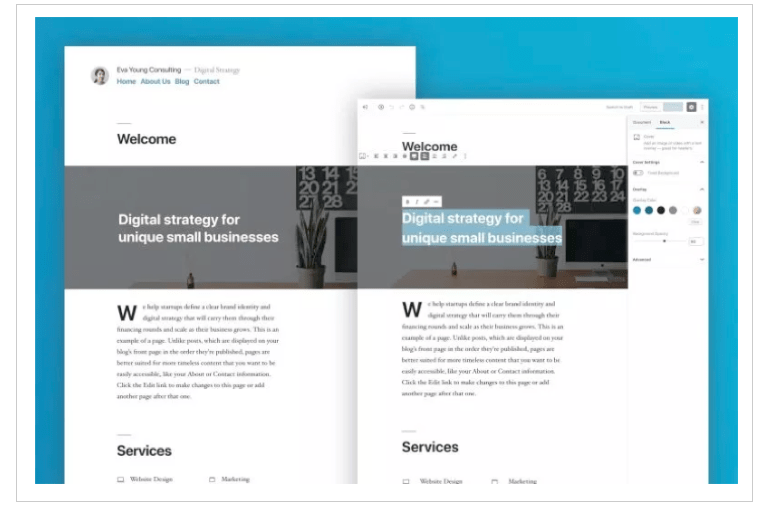 Creation and Composition. As a publisher or developer, you are now able to control the end result of the webpage. Also, you can be able to build markups which are more semantic and polished. These are preserved when making edits thus eliminating inconveniences like breakups.

There are multiple interface components and APIs which allow you as a developer to create blocks using more intuitive controls. You can develop your website faster and achieve more consistent results. The components ensure that the interface achieved has more utility and accessibility for the user.

The block insertion is meant to enhance flow which makes the process of locating and utilizing blocks much easier. As a developer, the update gives you a wide range of editing capabilities and experiences. You can keep the classic editor for an easier transition.

Security. Being the most popular CMS around the globe, WordPress is very conscientious about security. It has continued the culture of improving security by providing new security plugins features in the new version which strengthen its core. As a developer, the new version allows you to change the content directly. It also ensures that no one tampers with the structure of the page content  when editing codes accidentally.

In conclusion, the new WordPress 5.0 touches on page development and user aspects including editing and themes. The conglomerate of features makes it a major update compared to previous versions like 4.8 and 4.9. It’s an update that you should consider especially if you are a developer.

Ann Foster is a professional writer, editor, creative content strategist of the online service which can help with math problems and any other assignments. Very dedicated to the favorite job, she enjoys writing and is very passionate about sharing her point of view with others. She likes everything related to science and modern technology.

Learn More
News Categories
Collaborate and Advertise with us